Super Bowl Season Is Upon Us

Even though the Chicago Bears won't be playing this Sunday in Super Bowl LV,  this time of year always brings up fond memories for Chicagoans from the last (and only) time they won the Super Bowl in the 1985 season. We will never forget that  Monday, on January 27th 1986 when the headlines for the Washington Post read "Bears Don't Shuffle, They Waltz, 46-10".

This past January we celebrated the only Super Bowl the Bears have won in history: Super Bowl XX where the Chicago Bears and their infamous defense routed the New England Patriots to the tune of 46 to 10.  It’s unfortunate but not much has happened over the past 35 years since Chicago dominated the NFL and brought home the Lombardi Trophy.

Bears fans had to wait more than 20 years to enjoy another championship game. It wasn’t until  the 2006 season, when another great defense led by Brian Urlacher brought them back to the Big Dance once again.  Unfortunately, the Bears fell short to the Peyton Manning led Indianapolis Colts and lost the game 29–17.

After all these years of mediocrity, you start to wonder why the Chicago franchise is still one of the most followed teams in America. To start with, Chicago is the second-oldest franchise in existence and has more Hall of Famers than any other team. This team has set a precedent of how and what football is in America.

In 1919, the Bears began as a company-sponsored football club and were originally called the Decatur Staleys after the A.E. Staley food starch manufacturing company. Only 3 years later, the mascot officially changed from Staleys to the Bears, and the team remained like this ever since.

The 1940’s was the golden era for the Chicago Bears. They dominated the NFL appearing in five championships and winning four. The 1940 season was particularly known for the 73-0 victory against Washington in the championship game, a great and formidable event. 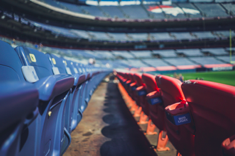 Over the years, the Bears have produced some great teams that have been exciting to watch. They’ve also been pioneers of the sport in many ways, setting precedent for the rest of the league. Here are a few fun facts that show us how the Bears have paved the way over the years.

1. The first game (and NFL championship) ever played indoors was at the Chicago Stadium in 1932. This decision was made after severe snow and extremely cold temperatures during the game week.

2. On November 27th, 1922, the Chicago Bears were the first team ever to do a player transaction. The team purchased the contract of tackle Ed Healey from the Rock Island Independents. The extraordinary amount of the purchase was $100!

3. There has been only five games in the entire history of the NFL with a final score of 2-0. The Bears have been involved in two of those five games, both of them were against the Green Bay Packers.

4. Beattie Feathers, who played for the Bears was the first NFL player in history to rush for over 1000 yards in a season. He accomplished this in his rookie season (1934).

Be safe and enjoy this year’s Super Bowl matchup between the Tampa Bay Buccaneers and the Kansas City Chiefs. Hopefully we’ll all be watching the Bears this time next year!